The Baldwin County Commission Adopts a Resolution in Support of Amendment 2 and Amendment 7 to the Alabama Constitution, to Promote Broadband Expansion and Economic Development, Respectively 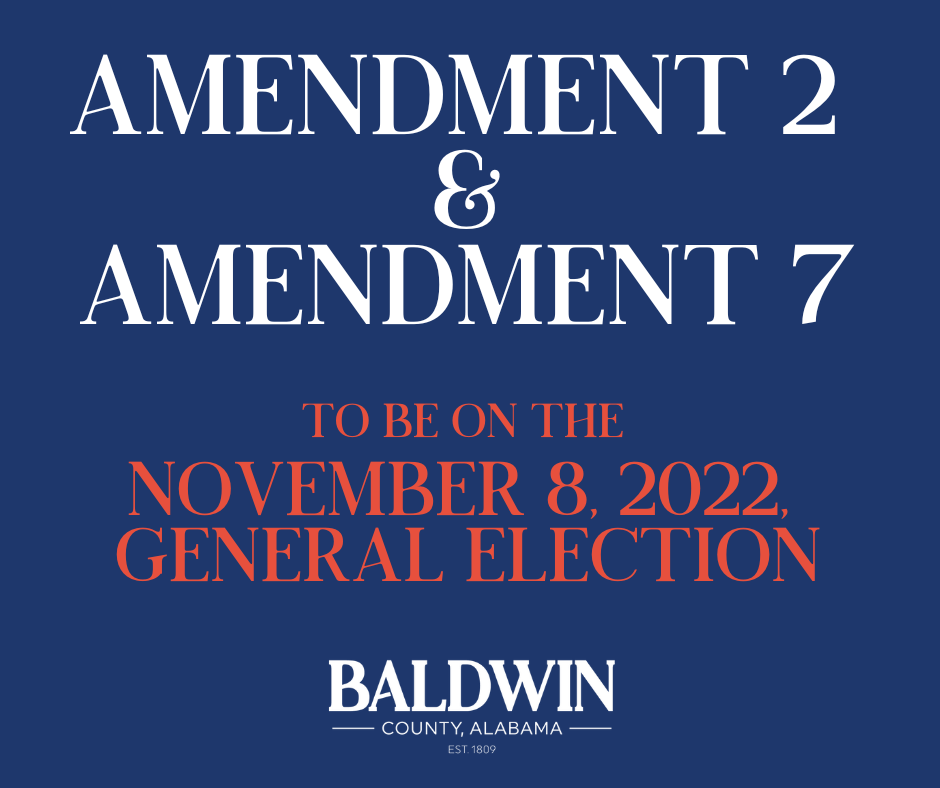 BALDWIN COUNTY, AL, This morning, Tuesday, October 18, 2022, the Baldwin County Commission adopted Resolution #2023-020 expressing support for the adoption of Amendment 2 and Amendment 7 to the Alabama Constitution, which will promote broadband expansion and economic development, respectively.

Citizens across the State of Alabama will have an opportunity to vote on Amendment 2 and Amendment 7 on Tuesday, November 8, 2022.

If approved by the general public during the General Election on November 8, 2022, these amendments to the Alabama Constitution will grant local governments the authority to partner with internet service providers for the expansion of broadband access and clarify local governments; authority to assist in economic development projects.

The amendments were priorities for Alabama county government during the 2022 Legislative Session and must now receive an affirmative vote of the general public in order to take effect.

Amendment 2 would authorize state and local governments to use certain public funds to incentivize broadband expansions, most notably in the rural and underserved areas of the state.

Amendment 7 would make several necessary technical changes to local governments’ economic development powers; the most important of which is clarifying that all counties may exercise these powers, regardless of whether they also have a local constitutional amendment pertaining to economic development.

Amendment 2 and Amendment 7 would benefit Baldwin County and the State of Alabama by prioritizing broadband expansion and economic development as we progress further into an era in which economic and technological stability are critical.

Proposing an amendment to the Constitution of Alabama of 1901, to authorize the state, a county, or a municipality to grant federal award funds or any other source of funding designated for broadband infrastructure by state law to public or private entities for providing or expanding broadband infrastructure. (Proposed by Act 2022-117)

Proposing an amendment to the Constitution of Alabama of 1901, as amended, to specify that all counties and municipalities may exercise the authority and powers granted by Amendment 772 to provide for economic and industrial development; to permit notice for Amendment 772 projects to be published in any newspaper in circulation in the county or municipality; and to ratify all actions and agreements of any county or municipality done under Amendment 772 unless subject to pending judicial proceedings on the date of adoption of this amendment.
(Proposed by Act 2022-286)

For any additional information regarding the local referendum on Amendment 2 and Amendment 7 please contact Budget Director/County Administrator Ronald Cink by telephone at 251.580.1646, or email at rcink@baldwincountyal.gov.